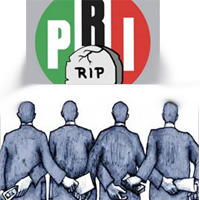 During the administration of the PRI and its corrupt leader Eruviel Ávila from 2011 to 2017, all the tax paying businesses involved in Toluca sex work were shut down.  The crown jewels of all sexual businesses are the strip clubs, but there were only 3 to 5 operating at the time.  A total of nearly 1,500 legal, tax paying businesses were closed.  The PRI, known for stealing from the poor to benefit the rich, made a decision based on their selective morality and closed all sex based businesses.  Did this hypocritical decision accomplish its goals?  Probably not.  If you goal in public service is to squeeze business for bribes and payoffs, you want as many strip clubs as your city can have.

Where the old system had prostitution regulated, taxed and contained, it’s now mainly a sidewalk business.  What was once behind closed doors is now present on street corners near the airport, the central bus station and the public market.  Instead of containing prostitutes in strip clubs at the edge of town, women and children not have to deal with it on street corners. While the PRI accepted bribes from drug cartels, polluting businesses and crooked unions, they shut down 1,500 registered businesses.  What was once behind closed doors is now on the sidewalks.  Prostitution is legal in Mexico and part of the culture.  Eruviel Ávila took his share of $41 million pesos robbed from the public health fund by the PRI.  He took a regulated sex industry and ruined it.  Rot in hell, corrupt motherfucker.