The TJ Police Are The Danger

In the United States, a popular game of SJW (Social Justice Warriors) is to blame the police for how they do their jobs.  But these same internet cowards will be the first to call the police at any sign of danger.  Americans don’t know how good we have it.  It’s not spoiled, exactly.  It’s more like being used to a higher standard.  In Mexico and particularly Tijuana, the police ARE the danger.  They are not paid much by the public, so to make a decent living they accept money from whoever will pay them; cartels, polluters, politicians.  Doesn’t matter.  It spends the same.  When that isn’t enough, the police become the criminals they are sworn to protect us from.  Let me explain how it works in Tijuana.

They’re For Sale, But Nobody Is Buying

In Tijuana, the cartels control the smuggling routes, drug sales and a lot of prostitution.  There is not a strip club in Mexico that is not cartel owned or pays a “tax” to the local boss.  Local government surrendered control long ago.  Police officers nationally average 31 pesos an hour, or about $1.60 USD.  In Tijuana, beat cops make $66 pesos an hour.  That’s a little over $3 an hour.   Monthly that comes to $18,000 pesos, which is a little over $1,000 USD.  They get no insurance and no pension benefits.  In response, Tijuana cops have begun robbing the tourists.

Gilbert from San Diego reminds us to be careful.  “I never had any problem in Tijuana along the many years I have used to go there.  3 months ago I was robbed by the municipal police searching me for drugs.  Probably my fault, but I made the mistake of carrying $600 cash with me.  I reported them to the tourist office and to the US consulate.  But I still see them in the streets.  I learned my lesson.  I now carry little money with me.”  This is no longer rare.  Municipal police were there to ensure that Gringos are protected.  Without tourists, TJ is a just another dirty, desperate border town.  Now, the city police are so corrupt that street robberies by uniformed police are a common, daily occurrence. 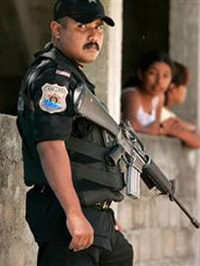 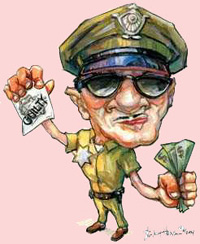 “I am 68 years old.  I was in Tijuana on business.  It was before sunset and I went for a walk.  A policeman called me over on a main street.  I was dressed in clean inexpensive clothes, and no jewelry.  I don’t drink, smoke or do drugs.  My behavior was not suspicious in any way.  He wanted to know what I was doing.  He searched my pockets, and found the pepper spray I carry for protection.  The officer said it was illegal.  It’s not.  He told me to get into his car and we’d go before a judge.  I took a step back, clenched my fists and told him there was NO WAY I would get into his car.  I was convinced he and his partner would take me to a lonely place, beat me and rob me.  Better to be beaten on the street, in front of witnesses.  He smiled like a wolf, and considered his options. “

“Beating an elderly, sober tourist on the streets who had not broken any laws would require explanation.  He told me to calm down.  We negotiated for 30 minutes.  I offered him $150 pesos.  (The exchange rate that day was 20:1.)  That was $7.50 USD.  He asked (in Spanish) why I was insulting him?  I asked why I had to pay anything?   I had done nothing wrong.  The fucking asshole queer searched my pockets 4 times.  It was just a negotiating tactic.  I had to submit, or he could say I resisted a legitimate search.  In the end, he took $20 from my wallet and we both walked away.  And….he gave me back my pepper spray.  I wanted to ask him why he would give me back my protection if it was illegal, but I wanted even more for the situation to be over.

To protect yourself from corrupt Tijuana cops, follow a few simple rules.

What Do You Do If Detained By a Corrupt Cop?

If you are harassed by city police, don’t panic. They just want a little money. It’s a negotiation. Stay calm. Whatever you do, don’t try to apply logic, get angry  or become a street lawyer.  Whatever their pretense, don’t fight it. Try offering your crooked badge bandit $5 USD. He’ll act offended. Go up to $7. If you’re smart, you’ll keep your larger bills hidden somewhere besides your wallet or your pocket.  You should be able to get away with paying no more than $50 USD.  If you handle yourself well, he may let you go for $20.  It’s frustrating, but an occasional nusiance if you visit often or get unlucky.

If You Are Truly Guilty of an Offense

If you get caught with drugs or a weapon, or another real crime, you’re in a different situation. Try to solve it on the street, even if you have to give the cop all your cash, your watch and your wedding ring.  Offer to go to a cash machine and withdraw your limit.  Your other option is to let him arrest you. Then, you have to pay off the street officer, his boss, and then a judge. Maybe you’ll get a lawyer.  The cost just doubled.  Depending on the crime, you’re looking at a minimum of $10,000 USD to go free.  Be humble.  Be calm.  Be understanding.  You have NO RIGHTS in Mexico.  Pay the officer a bribe and get on with your life.