Allende; Not Many Escorts 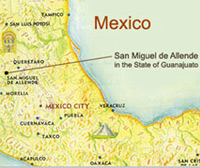 San Miguel de Allende is a city of 150,000 in central Mexico, in the state of Guanajuato.  That’s the same size as Manzanillo, which is a better escort town. The name is a mouthful.  English speaking people refer to it as “San Miguel” and Mexicans shorten it to “Allende”.  About 20% of the population is from other countries, primarily the U.S.  As a result, the town contains vegan organic cafes, boutiques, art galleries, upscale restaurants and hotels.  SLP also boasts a wide variety of bars and nightclubs. The foreign residents are permanent and buy homes. From the photos, it looks like one of the most beautiful cities in Mexico. San Miguel de Allende has hilly terrain, a mild climate with a good mixture of sun and rain.

…But Not A Great Place To Visit

There used to be at least two strip clubs, lots of brothels, and plenty of great stories circulating about the escorts. The prostitutes in San Miguel were reputed to be beautiful, abundant, inexpensive and many spoke English. Now, Google doesn’t list ANY strip clubs, the few escorts advertising online are expensive and the brothels may no longer exist.  To reverse the old saying, San Miguel de Allende looks like a nice place to live but I wouldn’t want to visit.