Not a Party Town

This is not Tijuana, a city famous for its strip clubs and brothels.  It’s also unlike Mexico City, which is famous for independent escorts.  There’s no Red Zone or Boy’s Town.  They do have a couple poorly rated strip clubs, a casa de citas (brothel) just outside the city limits, and several bars set up for you to meet escorts.  If we were to recommend something to a tourist staying for a couple days, it would be to find an independent escort.  Are you just passing through? If youdon’t want to invest more than a couple hours, try one of the brothels or hooker bars.  Those seeking a memorable strip club experience or a happy ending massage, keep driving to Cancun.

Fortunately, here are many local girls and wives turning tricks.  If you like amateurs who have temporarily turned pro, you’ll be in heaven.  Many of the escort ads have photos with the faces blurred so the family won’t recognize her.  Imagine sweet college student Maria offering to suck you off for $800 pesos ($40 USD) to help pay tuition. Your chances for a memorable GFE experience in Merida are better than any other big city in Mexico.  Don’t blame us if you don’t have the energy to climb the stairs at Chichen Itza. 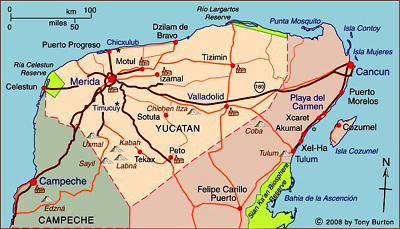 Quick. Which is biggest? Merida or Cancun? Most people would say Cancun. (Who’s heard of Merida, much less Merida escorts?) But with nearly a population of nearly 1,000,000 vs. 600,000, Merida is clearly bigger than Cancun. It’s also the capital of the state of Yucatan. It was built on Mayan ruins, a city carved out of a hot, sometimes humid jungle. (Average temperature is over 90 degrees, moderate to high humidity.)  Does this sound like a magnet town for escorts, strippers, street walking prostitutes and hookers?  Don’t expect to find any English speaking prostitutes.

A City Rich in History

It’s an easy 2 hour drive to Chichen Itza, the best known of all the Mayan pyramids. Merida is the oldest continually occupied city in North or South America, established in the mid-sixteenth century by the Spanish. Around 1900, Merida had more per capita millionaires than anywhere else on earth due to local production of some agave cactus used in rope making.

There are beautiful people, and beautiful people means gorgeous escorts.  A lot of people with Dutch and English heritage blended with the Spanish and Mayan descendents, making gorgeous descendents. It’s pretty cosmopolitan, with a major airport, lots of museums and even a symphony orchestra. Unlike Cancun, there are plenty of factories and farms. There’s tourism, but it’s mostly history buffs wanting to visit the many Mayan ruins within driving distance.