They are called “taxistas” in Spanish, and in Culiacan a taxista could be your new best friend.  Since Sinaloa is arguably the most Gangster state in Mexico, you should be careful about where you go, when you are out and how to behave.  A good taxista knows all this and more.  He knows where the girls are; escorts, brothels and strip clubs.  There may be some strip clubs that are off limits to tourists.  He may also know a 18 year old student who wants to earn a little extra money on the side….or on her back.  Mileroticos (the free website used across Mexico as the place where escorts advertise) is not as helpful as in other cities, and none of the ads are in English.  A taxi driver can help. 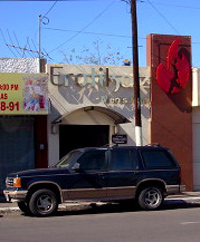 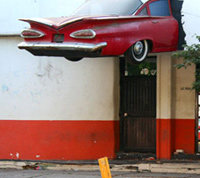 Strip Clubs in the Zona Rosa

There are several excellent strip clubs in Culiacan.  Go to the Red Zone.  Any taxi driver can take you.  All the strip clubs are located there.  Below is a partial list.

Los Baldes has a Facebook page and other information on the web.  Looks like a fun place. Blvd. Francisco I. Madero y Vicente Riva Palacio Col. Centro.  The reviews are lukewarm, but it looks like they have a lot of girls.

Osiris is located on Avenida Obregon.  Like a lot of the Culiacan clubs, there are reports of it being closed, reopening, closed again.  What’s going on in Culiacan?  One recent report says a privado in VIP can cost $2,000 pesos.  That’s expensive for Mexico, but only about $160 USD.

Is Yardas still open?  It’s the club pictured below with the ’58 chevy embedded in the wall over the front door.  One old strip club posting says they have 25 dancers.  That would make it one of the biggest clubs in Mexico, outside Tijuana.  Another posting says they’re closed.

Does Lord Black have a club here?  Several older online postings have Lord Black on the list.  Again, your Culiacan taxi driver will have all the answers.