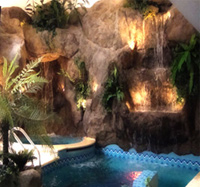 What do mushrooms, massage places and brothels have in common? They are always sprouting, dying and re-sprouting. The cheaper massage parlors need locations, but due to police corruption and cartel pressure it’s less expensive and safer to keep moving. For the latest information, try a cab driver or your hotel staff. You can also use the same escort ads listed on the escorts page. Outcall is outcall, only some girls feel better by advertising massage (in Spanish, it’s “masaje”, pronounced mah-SAH-hey.)  Mileroticos is where you will find the most online ads.

Be Careful of Travestis

In Culiacan, travestis are most active online in the massage section.  They figure guys will say “doesn’t matter, I just want the massage”.  The next thing that happens is some sort of seduction, which is what they both wanted all along.  It doesn’t matter if that’s what you want.  But know what you are getting into.

It’s funny.  The capital of the biggest cartel state in Mexico loves their Chicks With Dicks.  We imagine these killers as Bottom Boys, taking it deep after a hard day of being tough gangsters.  The “gay” ads outnumber the straight escorts on Mileroticos.